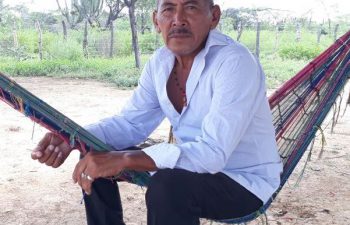 Lorenzo is a passionate Wayuu follower of Christ who delights in sharing how God transformed his life.
A few years ago Lorenzo was desperately lost and depressed.  He turned to his alcohol addiction to numb his feelings of loneliness and insecurity.  Lorenzo said, “I used to believe there was no God, I was a bitter and lonely person.”  One day, Lorenzo got sick with a rare disease that doctors could not figure out.  After weeks of different treatments, the doctors finally gave up and sent him home to die. Lorenzo trying to find an alternative solution, went to several Wayuu witch doctors to find a cure, but all his attempts were unsuccessful.

Right when Lorenzo had lost all his hope in finding a solution himself, one of his closest friends shared the gospel of Jesus Christ with him.  Lorenzo heard about what Christ did on the cross, reflected on his sin, his need for a savior, and that day Lorenzo surrendered himself to Christ.  He started going to church with his friend and their community of believers prayed over him.  And by the grace of God and the power of prayer Lorenzo was saved and healed from his deadly disease.

Mazed by God’s power and faithfulness, Lorenzo was eager to learn more about Him.  Our dear friend, Pastor Antonio Riveira, started a listening group at Lorenzo’s home. Lorenzo was amazed to hear God’s Word through the Proclaimer in his own language.  He wanted to listen to His word all the time and share the good news with everyone around him.  So, Lorenzo used his old push-button mobile phone to record the word of God, straight from the proclaimer.  Then, he would go to all of his friends, family, and other Wayuu communities telling them: “You have to listen to this, there is power and salvation in these words.”

Posted on behalf of Bread of Hope