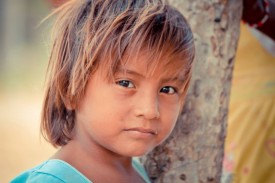 On November 2013 our Bread of Hope team in Venezuela traveled to the Goajira province in Colombia.

They visited the communities of Uribia, Manaure, and Shirulia.  They worked alongside Eben-Ezer Baptist Church to support them in evangelism and community outreach.

The BOH team brought some proclaimers, which became an essential evangelism tool.  More than 70% of the population of Uribia, Manaure, and Shirulia only speak Wayuunaiky (the native language of the Wayuu).  Many did not speak Spanish.  It was a blessing to many to be able to hear God’s word and see the Jesus film in their heart language.

The province of Goajira is located in one of the most forgotten and overlooked areas of Latin America.  It’s an arid, desert area that makes agriculture and food production very difficult.  Many of the people that live there make a small living off of their homemade production of salt.  However, the government has recently handed this area over to transnational corporations who are now taking over most of the area’s commerce.

In the small villages they visited, there was no access to power and electricity.  One of their biggest needs is access to drinking water.

For many their water comes from an open well that is often easily contaminated by runoff, insect larvae and pollution.

Another major need for this area is training for pastors and leaders.  Many are in need of bible training and materials.
Thanks for your prayers and support.

Check out the pictures:
PICTURES